Someone asked me recently if I had stopped blogging. I instantly said "no" but as I look at things maybe in some ways I had. The past couple of months have been difficult on the health front and a bit of a roller coaster. Sick, recovering, sick again. Nothing it seemed was getting accomplished. but I suppose in little bits it has. I continue to do pattern testing for a variety of designers. Some of the testing is secret and some is not. It is easier for me to think of it as all secret. Then I don't show a photo I should not have shown.
So I can show this photo. As I work away at tests I continue with my love of Leaders and Enders. This quilt is just such a project. I was given a large baggie with several smaller baggies. The smaller baggies contained very small triangles that matched each other. A somewhat larger baggie contained a lot of white triangles that were similarly sized. So I stitched a coloured and a white triangle together Leader and Ender style. Then I made pinwheels with the HST's. Then I made pinwheel nine patches, then turned those into square in a square. Needless to say this project has been on the go for a while. It is now awaiting quilting. Piecefully, Joanne
And linking to Cynthia's Oh Scrap! (here) 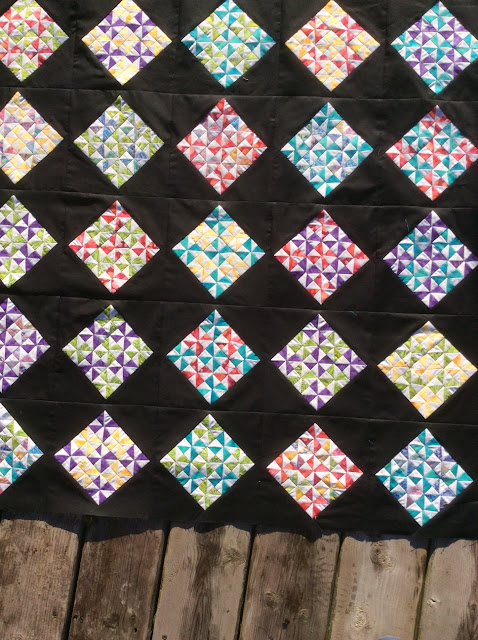