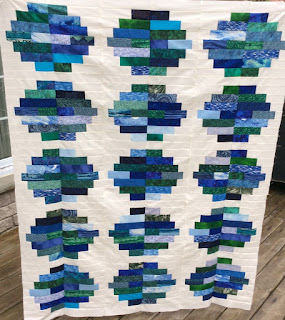 I am so excited to be able to reveal this particular test pattern. It is called Ellipse and the pattern can be found in Gudrun Erla's newly released booked called Stripology Squared. On the final two pages of the book she shows one test quilt for each quilt in the book and mine was picked for this particular pattern. The patterns in the book are all designed to use layer cakes. I used scraps to make a layer cake and then put together the design. Each of the ten designs in the book come in multiple sizes, so if you like her modern geometric style you will likely love this book. She started shipping the book Monday so watch for it at your local quilt shop or check out Gudrun's Etsy store.
I continue to make tiny steps of progress with my knee and have a return visit with the surgeon coming up next week. Piecefully, Joanne

Linking with Lorna at Sew Fresh Quilts for Lets Bee Sewcial (here)
Posted by Joanne at 3:41 AM 7 comments:

A test project I can now show

Jen, over at Patterns by Jen (PBJ) (here) is launching her Star Light, Star Bright sampler today. I made the small size it is approximately 30" square. She has a larger quilt and a couple of table runners in the pattern also. As one might expect I made mine scrappy. A friend had given me a baggie with many of the pieces of used for this little project. I put a nice soft flannel on the back and it is now ready to donate.
I am so happy to be back sewing again and am back to pattern testing also.
Physio is progressing reasonably well. Knee is bending, just not as far as it is supposed to. I see the doctor again in early July.
My main sewing machine has had a trip to the spa and it isn't the same sewing on the back up but I imagine there are many thousands of people who either don't have a machine or for sure don't have a back up.
It is starting to look like a fairly busy summer. The boys are going to spend a big chuck of July with their other Grandma and then they will spend three weeks (every other week) here in August. Piecefully, Joanne
Linking up with Sarah at Confessions of a Fabric Addict (here) and Michelle at Michelle's Romantic Tangle (here)
Posted by Joanne at 10:32 AM 4 comments: 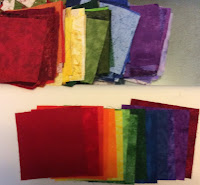 The Modern Quilt Guild of Ireland is having a Quilt Along featuring the Dutch Rose block. One of those blocks I love. They are making it a rainbow block and have explained a bit about the colour wheel in their first post. You can make a small (baby) quilt with 5" squares or a larger quilt with 10" squares or likely even fat quarters. A couple of years ago our guild did an exchange of 5" charms. Each month was designated with a different colour. At the end of the year we were given a pattern to use but it just didn't fit so I had two baggies full of rainbow inspired charms to pick from. You can find the beginning details of the quilt along here modernquiltguildireland.blogspot.ca. Even if you don't decide to do it you will learn something about the colour wheel from reading their blog.
I got the go ahead to drive today so that is good. He wants my knee to bend a little more and says that when I go back in a month he can give me an anesthetic and "tweek" it a little to make it bend more. So I will be celebrating the 4th of July with another trip to the city to see the doctor. Piecefully, Joanne 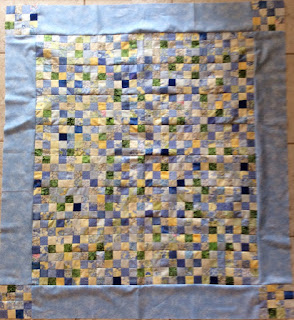 This was a strong motivator for me to get back to my sewing machine and working. I had to be able to bend my knee enough to sit at the table. I am happy to say, I reached that point about two weeks ago and have been stitching ever since. Mind you it is in short bursts of time and then I need to move around a bit. Guess I need to build up my tolerance again.
I do not remember who gave me these scraps. Or most of them. I cut them all to 1 1/2" squares and added some from my scrap heap that I thought would work well with the core group. I stitched them together Leader and Ender style. First one I saw as light with one I saw as dark. Pressing all to the dark. Then those were joined into four patches and then sixteen patches. Once we were at that stage I let them talk to me from the design floor. I had 60 sixteen patches which would have made a really long skinny quilt. So I went with using 56 sixteen patches and kept four for corner blocks. One of my friends drove me to the local quilt shop and I picked out this border fabric. I will be happy to be able to drive myself places after tomorrow's check in with the surgeon.
I have done a lot of reading in the last few weeks but am anxious to get back to doing something more hands on. Piecefully, Joanne
Linking with Cynthia (here) for another session of Oh Scrap!
Posted by Joanne at 10:33 AM 3 comments: