What happens at retreat, stays at retreat...but I can tell you this much

I had a terrific time. The Kincardine Sunset Quilters Guild booked the Crieff Hills Centre for a 2 1/2 day retreat. We arrived Tuesday morning and left Thursday afternoon. We all brought projects to work on. Each person had their own table. Irons were set up in the hall outside the sewing room. We were bunked in at two to a room.The food was great and the company was even better. This is me at show and tell. On the design wall behind me is a lap size double slice quilt top and I am holding up a tiny bricks baby size quilt. I got four tops assembled at the retreat. The blocks were done and I had laid them out in rows before going, so the sewing was pretty mindless. Also got a start on the Braille Quilt Along. Thanks to all the organizers for a wonderful time. that being said we thought we should be somewhat circumspect when describing the experience so we would not have too much competition for the limited number of spots next year. Yes, next year is booked already. Piecefully, Joanne

Posted by Joanne at 3:01 PM No comments:

Family, where would we be without it? 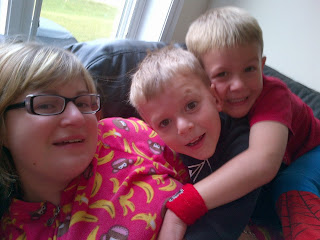 Our daughter and "the boys" taking it easy early Sunday morning. So not my usual quilting post but such a fun photo I couldn't pass it up.  Piecefully, Joanne

Brenda Papadakis gave an informative and entertaining talk of Friday evening at the Bennington Museum in Bennington Vermont. She described how she had come across the now famous Dear Jane quilt and how she ended up drafting the designs for the blocks found in the quilt. After her talk we had the opportunity to see the original quilt. I was amazed by its condition (excellent) and the depth of colour that was still present after 150 years. Yes this is the 150th anniversary of the quilt.
I often wonder  how my work will stand up after 20 years let alone 150. It would appear that the Dear Jane quilt wasn't actually used. There is a lot that is unknown about the quilt and its maker and this allows one to speculate and fill in the blanks on your own. 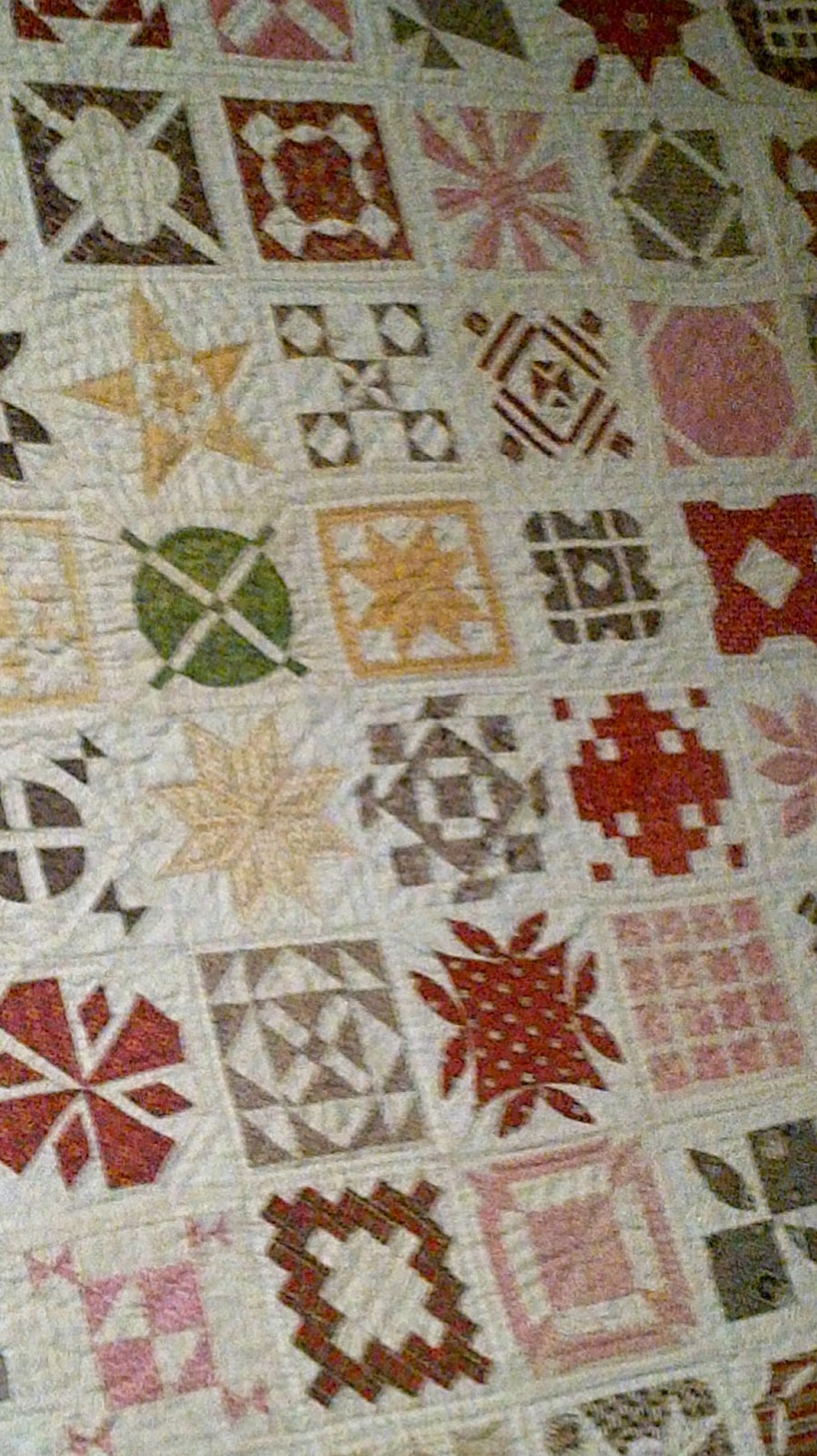 This is one section of the quilt. You could not stand back far enough to capture the full quilt in one shot. The Museum puts it on display for 6 weeks a year and we were there during that time.
On Saturday I attended a workshop given by Brenda. We first introduced ourselves and I was surprised to see that four people in attendance had come from Calgary and another attendee was from Australia. We did a couple of the more challenging blocks. It was so much fun to get out and do some serious sewing with like minded people. One woman at the workshop had completed one Dear Jane quilt in traditional colours and was now working on one in modern brights. Quite a contrast.
Piecefully, Joanne
Posted by Joanne at 8:31 AM 3 comments: