Can you find the purple? 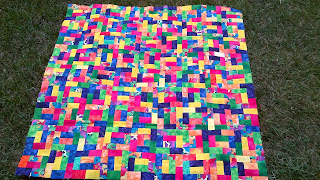 Well if not, then how about the blue or the green or the orange or the yellow or the wild pink? This is yet another of my tiny bricks quilts. This one is just over 36" square and I think will make a happy baby quilt. The print that is scattered throughout is the funky sheep fabric that I used for my sister's quilt. I think life is going to start settling down and I can look at perhaps finishing a couple of quilts. Piecefully, Joanne
Posted by Joanne at 4:03 AM 3 comments: 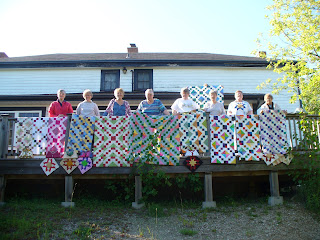 Here we are "modelling" our mystery quilt tops. the activity went quite well. I told them we were going to use Pat Speth's Nickel Quilt strategies and that the quilt would be crib size. I also gave them the number of light, medium and dark nickels to have with them. Only two had ever done mysteries before and those were not overly successful or so they said. I believe all were pleased with the results.
Cathy and Gayle planned a terrific retreat and the weather made us want to stay inside so we all got some serious sewing done. The food was tasty and nutritious. Great company. Not much more one could ask for. We also had a murder mystery to maintain the theme. Before the weekend we got our characters and what props we would need. The night of the mystery event we were given our scripts. Imagine my surprise when I found out I was the murderer. That meant I could tell lots of mis-directing lies. We laughed ourselves silly with that activity and only one person guessed me as the guilty party. Piecefully, Joanne