It has been a month of challenges 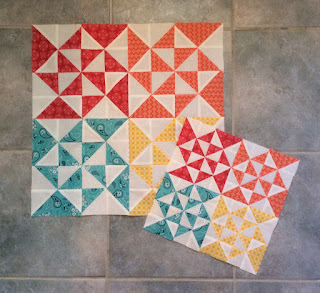 Here is my Clementine Quilt Along block for this month. I have had a few too many sick days this month and have not taken those sneak peek photos that are to grab your interest before the big reveal. This block is titled Peaches and Plenty. Once again the steps are straightforward and clearly outlined on the instruction sheet. I hope you will consider joining in. Previous month's patterns are still available and all the Fat Quarter Shop(here) is requesting is a donation to St. Jude's Hospital. If you have ever spent time at a Children's Hospital you know just how important their work is. We spent time at the Hospital for Sick Children in Toronto with our son over 35 years ago. Happy those days are now behind us. Piecefully, Joanne
Posted by Joanne at 7:44 AM No comments:

Welcome to the final day of guest bloggers on the Modern Plus Sign Book Blog Hop. I had the absolute pleasure to be part of this hop. The first part of my quilt was what I called the dark block. A plus sign in the centre of a bear paw. I wanted my fabric choices to be somewhat masculine and thought of black bears and grizzly bears when I was scouting my stash for something suitable. 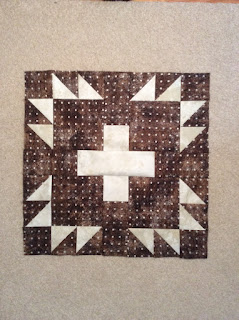 If you missed the first week of the blog hop and have time to visit the bloggers who highlighted the first patterns shown from the book here is a list that connects directly to their blog post. 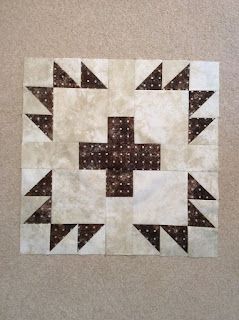 The second component is one I call the light block. Again a straightforward, no issues quilt block. The book is well illustrated and the directions are very easy to follow.

The end result when the two blocks are combined is this lovely Bear's Paw Plus Quilt. It is so nice to say this quilt is finished and once the blog hop is over will reside on my hubby's easy chair. He has needed a new quilt for some time and this one is just the ticket. 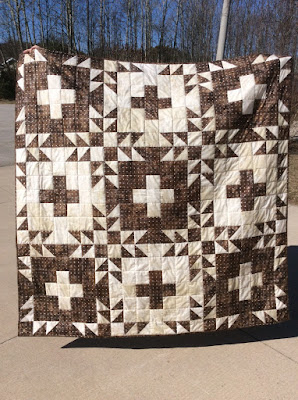 I used my walking foot to straight line quilt the grid on this quilt. Cheryl and Paige will wrap up the hop tomorrow. If you have been following you will know by now what a great book this is. You can obtain signed copies directly from them. Thank you Cheryl and Paige for letting me part of the blog hop for your fabulous book.  Piecefully, Joanne

Here are the links for this week's Blog Hop participants. 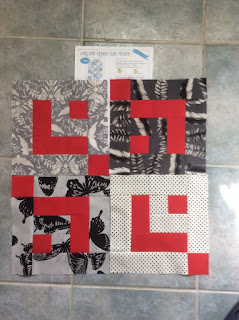 Meet Jelly Roll ripples. Or rather my practice blocks. The Post Office either south of the border or here decided I needed to wait for my real fabric. So while waiting I decided to use a partial jelly roll and some Kona Red to test out the block.The pattern is truly easy to follow. Each block uses most of a jelly roll strip. My real fabric is here so I need to get on with my real quilt. Hopefully I can post a picture of it sometime next week. Piecefully, Joanne
Posted by Joanne at 8:07 AM 2 comments:

I do enjoy a finished quilt 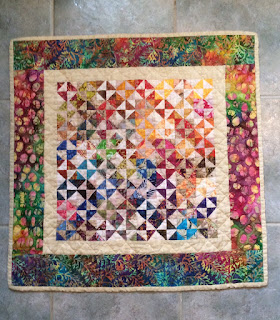 At our Guild retreat last fall one of our guild members was throwing out her "bonus" triangles. I couldn't have that. When I said sure I'll use those she was kind enough to start collecting them in a baggie so they did not go everywhere. And then at another quilting get together another friend did the same thing. So these are primarily the bonus triangles from two different quilting friends. So much fun to play with. I used two different fabrics for borders because I did not have enough of either one. As far as I am concerned they work together. This quilt will be going to Project Linus later this week.
Hubby has set a goal of our 50th anniversary for me to get the quilt tops in the house made into quilts. And to facilitate that he is pinning them ready for me to quilt them. He has done three this week and I am just finishing stitching the binding in place on number three. So need to get backing organized for a couple more for next week's pinning session. I do have a couple of years to work on this.
There are a couple of big events coming up in the next little while. Hands2Help sign up starts today. and the Modern Plus Quilts Blog Hop begins this week. More about both in the coming week.
Piecefully, Joanne

Linking up with Cynthia for Oh Scrap! at quiltingismorefunthanhousework.blogspot.ca
Posted by Joanne at 7:25 AM 4 comments: