Make new friends, but keep the old, one is silver and the other gold 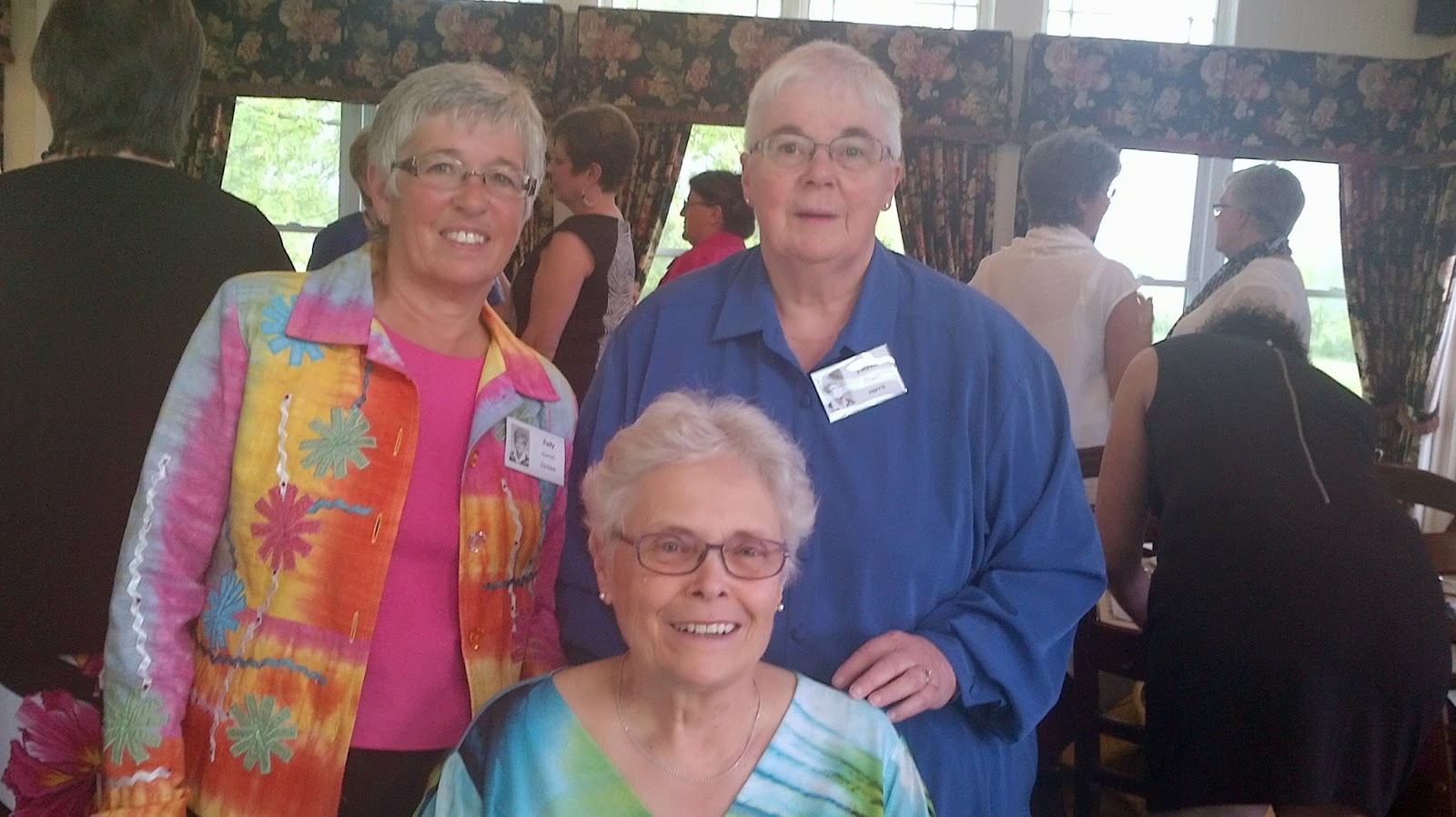 My class had its 45th reunion last week. Three of the four of us who lived together were able to be there. My oh my what a lot of visiting took place! The organizers for this reunion had it take place at The Waring House in Picton, Ontario. It is a part of Ontario that I have not spent much time in. There are a huge number of things to do and see even in the "off" season. Wine tours, arts tours, cheddar and ale tours, taste tours to name a few. The Waring House also has a cooking school. I will confess I hit the road on Wednesday morning and drove to Belleville to visit Fun with Stitches a fantastic quilt shop. I helped reduce their inventory. After that I rejoined the wine tour people at their fourth stop for a delicious lunch on the patio. It was the first really lovely day for weather most of us had seen for a long time.
My sewing machine decided to misbehave on Friday afternoon. I drove it to the repair shop on Saturday and while it may not be terminal it is definitely ill. So for the next little while I will be spending time trimming scraps and making kits so that when I get my machine back I can get to work again. Piecefully, Joanne
Posted by Joanne at 12:36 PM No comments: 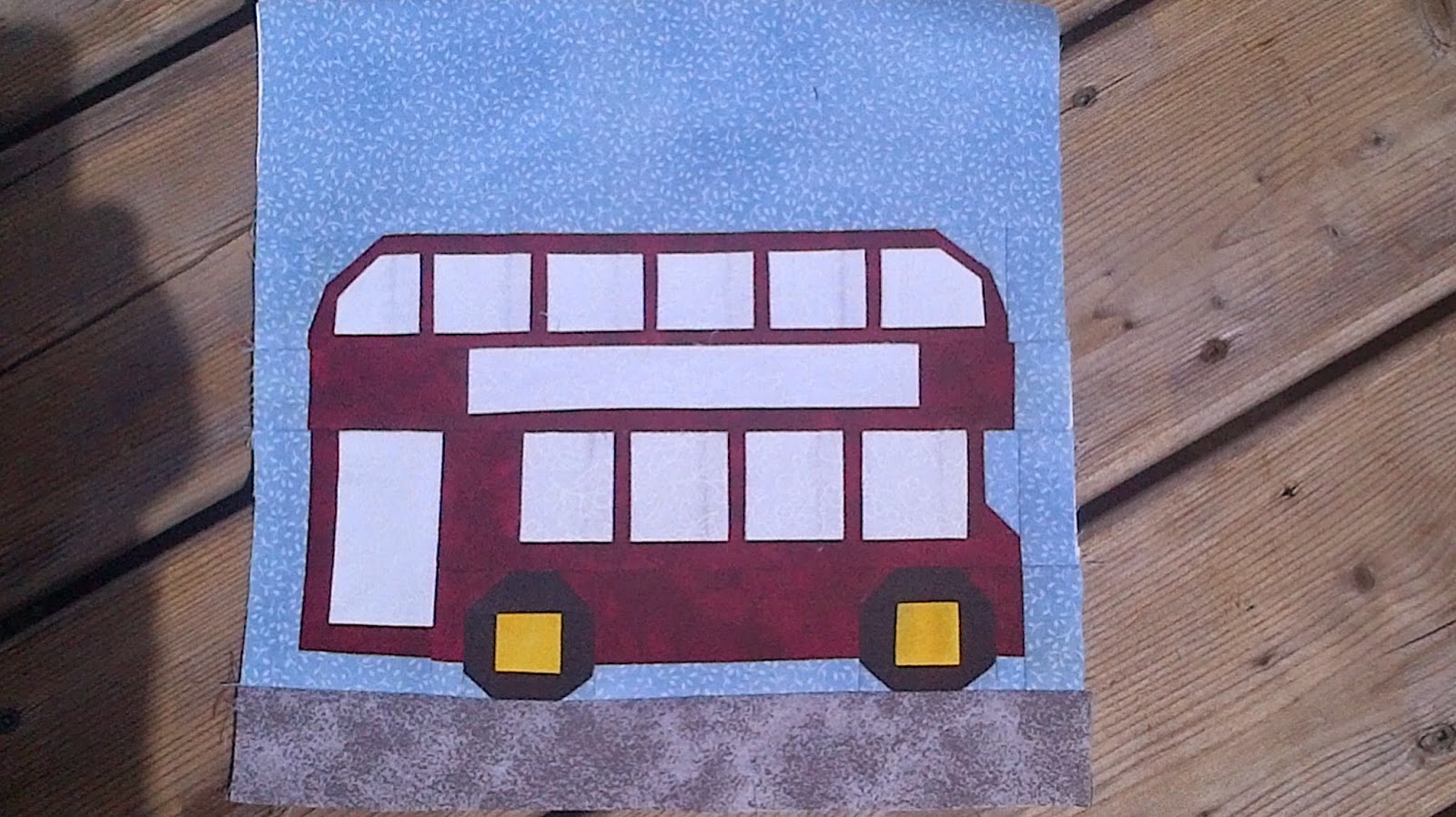 This is a charming double decker bus Kristy from Quiet Play (here) designed. She emailed  her tester group about a week ago to let us know she had some blocks ready for testing. I picked the bus and it was still available. She has done a whole series with a London theme. They are out at various testers and should likely be available through her Craftsy store soon.
I am almost caught up again with my Quiltmaker's 100 Blocks volume 10 testing. No that is not a typo, volume 9 is available now and Volume 10 will be out in the fall. In the middle of all this my machine ground to a halt. I believe some thread is wrapped around a spot I cannot get to. Or at least I am hoping that is the problem. I phoned my service people and I can take it in for a look see tomorrow morning. So instead of hanging the wash on the line I will be spending 4 hours in the car taking my machine in for servicing. At least it is looking like the weather will be OK and I will get in a little visit with the Grandsons. Piecefully, Joanne
Posted by Joanne at 3:08 PM 4 comments: 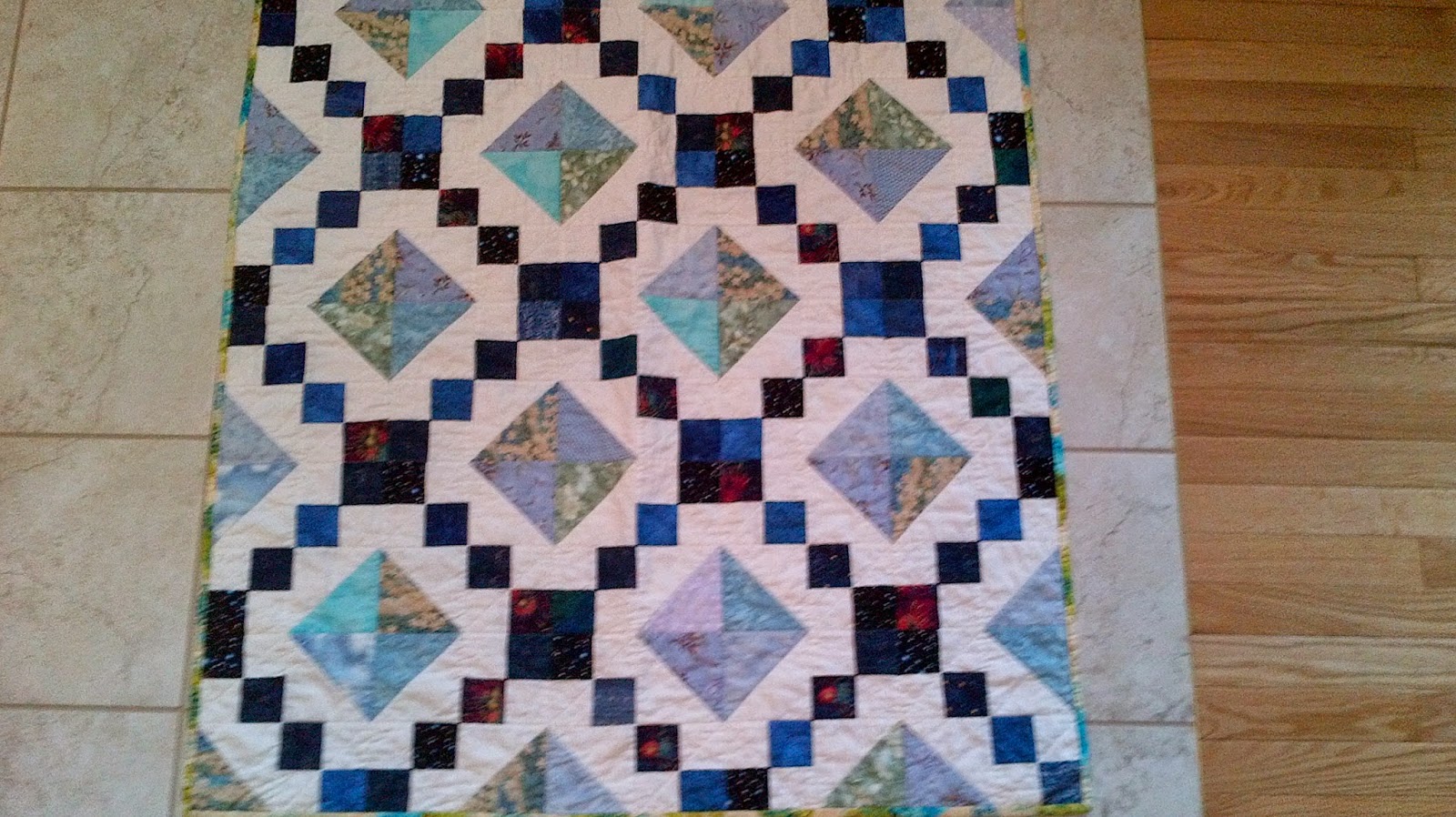 This is my second Hands to Help. It is all bound and labelled and ready to donate at the next Scrapbag Quilters meeting. It's final dimensions were 41" by 49". It was originally done as a mystery quilt using nickels.
I have been busy with my Quiltmaker testing and one for Kristy at Quiet Play. The Quiltmaker testing is for their 100 Blocks magazine Volume 10. It delights and amazes me how many talented designers there are and this publication gives many of them an opportunity to shine.  Piecefully, Joanne
Posted by Joanne at 3:47 AM 32 comments:

The Tooth Fairy had to make a detour to Grandma's House 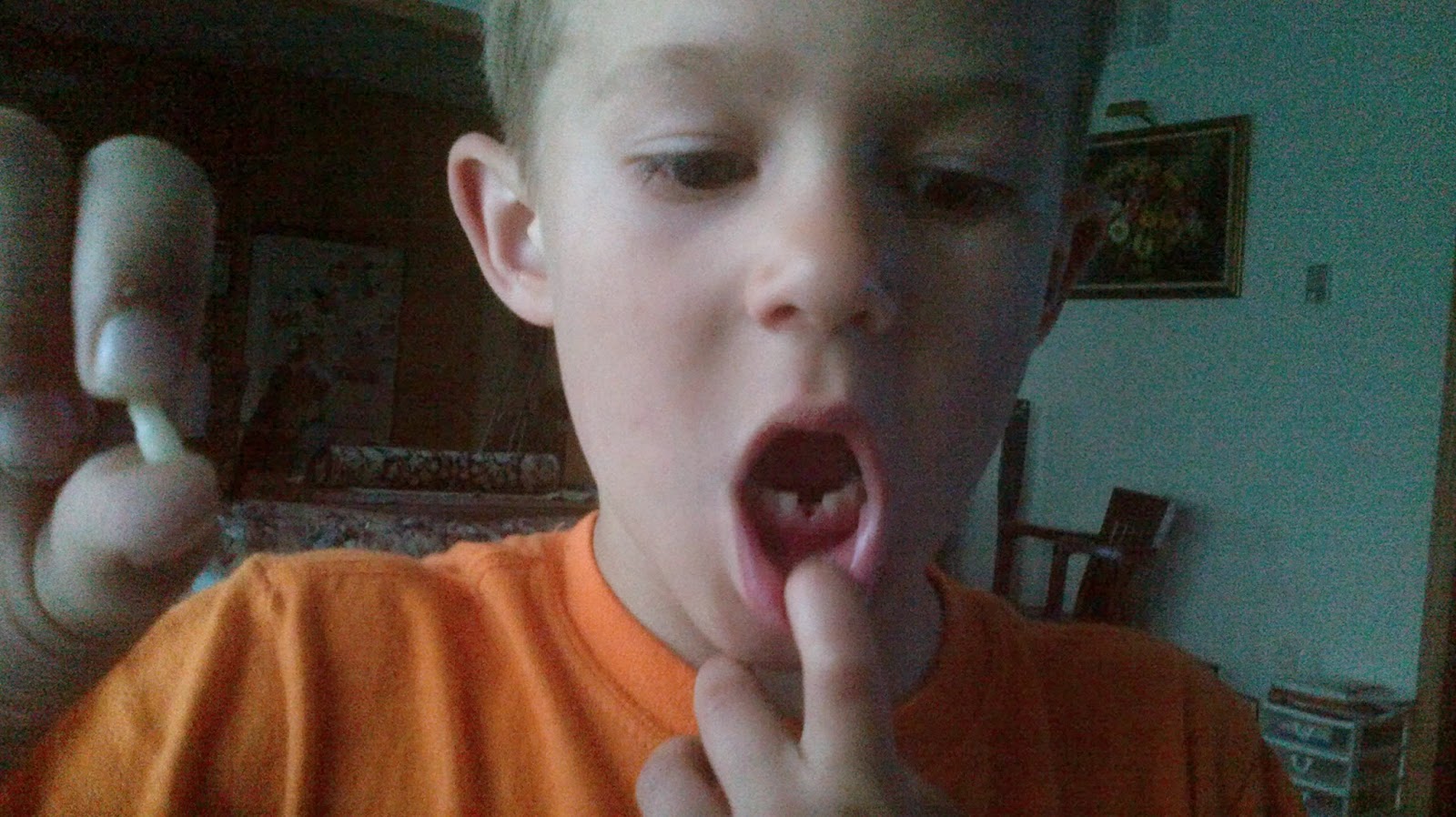 The boys are here for the weekend, therefore limited sewing happening. They know that one of the things that makes me shudder is a loose wiggly tooth. So Friday night they were showing me Dylan's wiggly tooth when it came out. We had to take a picture to send to his Mom who is supposed to be pampering herself at home this weekend. The all knowing tooth fairy made it here and surprise, just like everything else inflation has hit the tooth fairy business. Piecefully, Joanne
Posted by Joanne at 10:30 AM No comments:

This little quiltlet went to Market, this old quilter is staying home 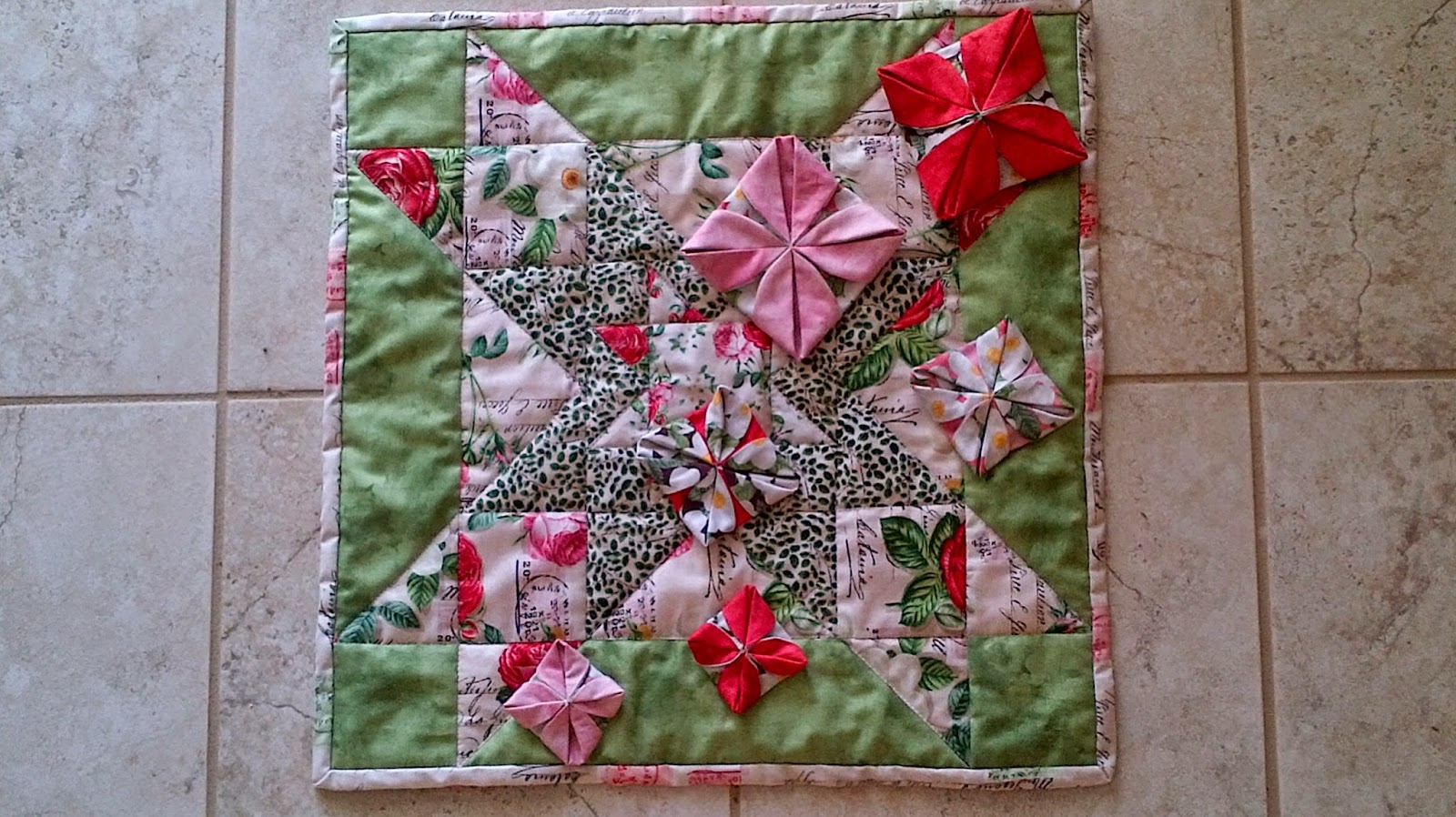 Early in April Windham Textiles had a blog post offering followers the opportunity to make a mini quilt that would finish 18" square and feature one of their new fabric releases. So I replied to their blog post and ended up with a nice sampling of their new Ava line. It is very traditional in appearance so I thought their would be a disconnect with a thoughly modern design. I went with a star in a star in a star for the background and some origami flowers falling across the background piece. I know it arrived  in New Jersey on time. I hope that somehow I will get to see a picture of their booth.
In other quilty news I have attended two quilt retreats since my last post. The first was in Woodstock and was with the Canadian on-line Quilters group. The hotel we stayed at had set up their well lit meeting room so that we each had lots of room to work. Everyone worked on their own projects but we did do some show and tell, and shared some mini demos. There was a near by quilt show that some attended and a marvelous shopping opportunity. All in all a great time. I went two years ago but life was too crazy at this time last year so even though I had said I would go I had to withdraw.
The second retreat was with some work colleagues. Although we are hardly work colleagues anymore. This year marks our 25th year of get togethers. At first we shared teaching ideas and strategies but gradually as we retired our time together was spent quilting. Finding a window of opportunity for 7 busy women to commit to the time away can be a challenge but in the end this time we had 5 there for the entire time and one who made it for some of the time. Lots of laughs, lots of sewing, good problem solvers always available and of course great food.
Now its time to stay home and get some work done around the house. Piecefully, Joanne
Posted by Joanne at 5:47 AM No comments: